There’s some windy weather headed this way for the weekend, so our aim for the day was to get as much practise in as we could, which is exactly what we did - a day without theory classes! We left around 7:45 as planned to head up to the north launch and got 4 flights in before the wind died, landing in the East paddock. In the evening we managed another 3 flights from the west and south launches, the last one into the sunset!

Disclaimer: This is part 7 of an 8 part series detailing what I learned and experienced recently while undertaking the fantastic paragliding course with the team at FlyManilla. You can find links to the rest of the details for each day from my overall course summary. I’m taking notes for my own personal reference and learning while it’s fresh, but it’s totally possible I’ve remembered incorrectly and have made mistakes. These are not notes for others to learn from but may give an interested passer-by who is considering a course a good idea about how valuable the course at Manilla is. If you’re interested in learning to paraglide, I’d totally recommend this live-in 9-day course at FlyManilla.

The flight plan was the same as before - first head to the immediate bomb-out area in front of the north launch, then assuming you’ve got plenty of height, head to the triangle paddock and do your first beat along the base of the paddock. During that beat, using the foreground / background method to see if we’ll easily clear the tree line on the way to the east paddock. If not, just continue beats on the triangle paddock and land there, otherwise proceed to the big east paddock.

The big east paddock is obviously big, but has different areas, some slope, a road going through the middle as well as a large tree near the wind sock. A number of us are finding that when you start your beats it feels like you’re hardly sinking (when you’re up high it’s hard to tell) so that it can be surprising on the last beat to see that the ground is approaching quite quickly (especially during your turns). One strategy that Karl mentioned to make it easier is to try to ensure that you’re heading in the upwind direction during the last beat before you do your last turn for the final approach. This will mean that you’ll have a lower ground speed for the last turn. Here you can see others doing their beats into the big east paddock, with the road through the middle: 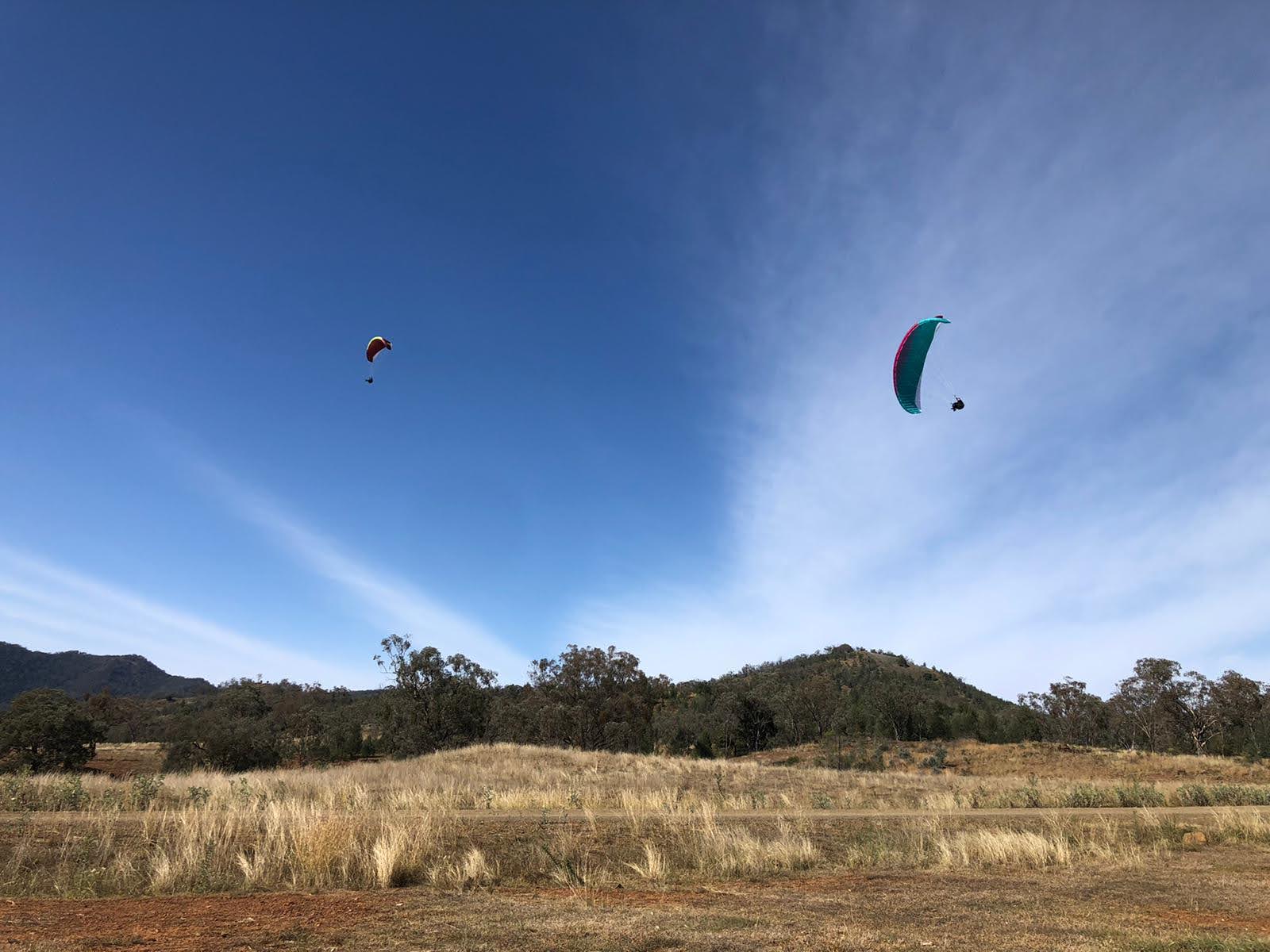 Some points from the debrief:

Ground handling in the paddock again

After our flight debrief and lunch, we headed out into the paddock again with the old basher wings (non-flyable wings) to practise reverse inflations. We had similar light and variable conditions making it tricky, but managed to get some good practise in. Unfortunately one of our class group sprained his ankle while walking backwards. As well as practising the reverse launch, I was also practising taking a wrap of the brake lines so that it’s easier to pull the wing down in strong winds.

After a short afternoon tea break, we did a ridge soaring simulation to practise the rules of ridge soaring (the person with the ridge on their right hand side has right of way) and then headed out again in the 4WD up to the west launch which we’d not flown from yet: 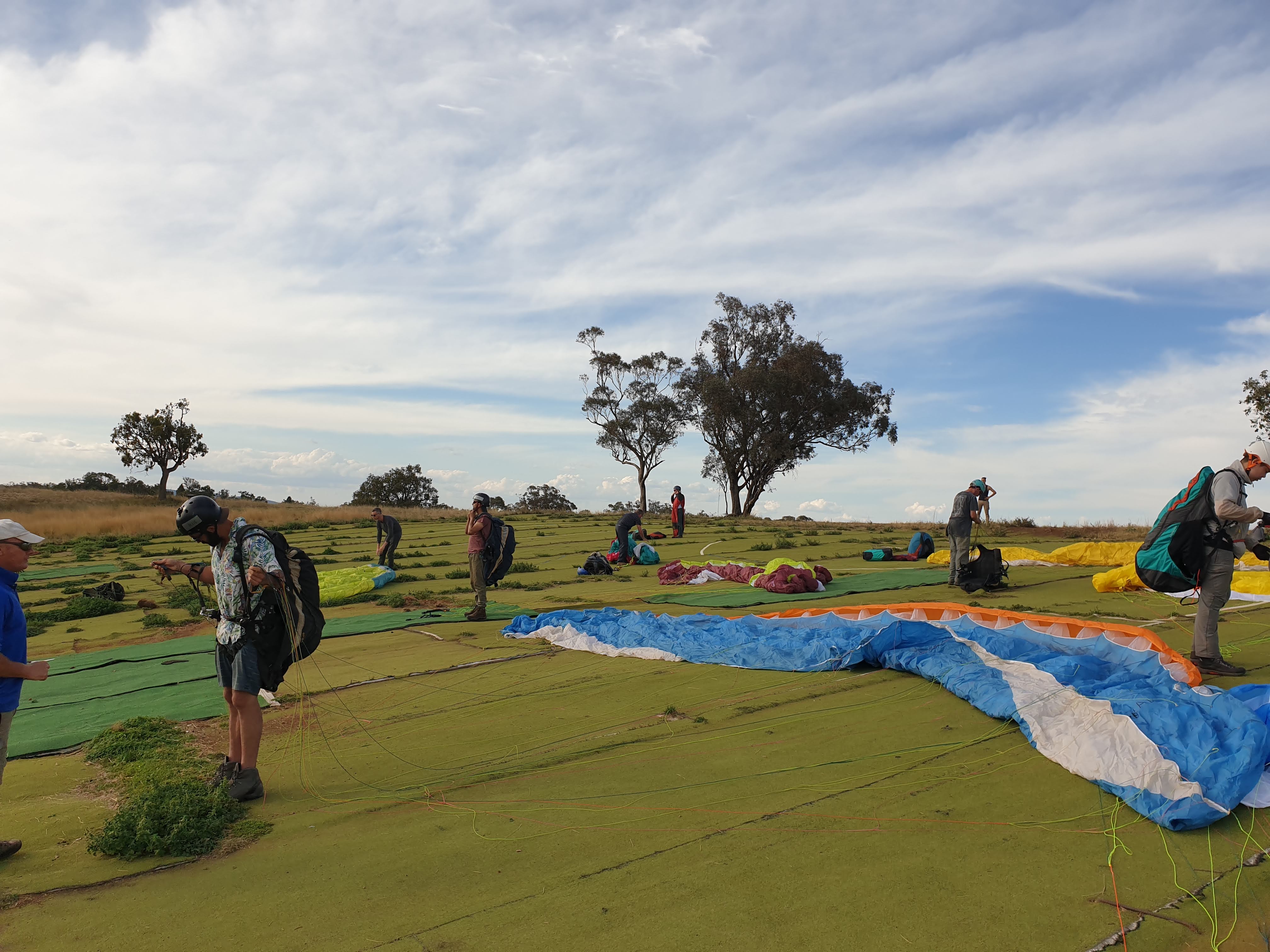 Unfortunately there wasn’t enough wind to actually do ridge soaring, so we just did a bombout run down to the west paddock as we hadn’t landed there yet. By the time we’d landed and come back up again in the basher 4WD, the wind had turned to the south. So we walked across to the less-maintained south launch: 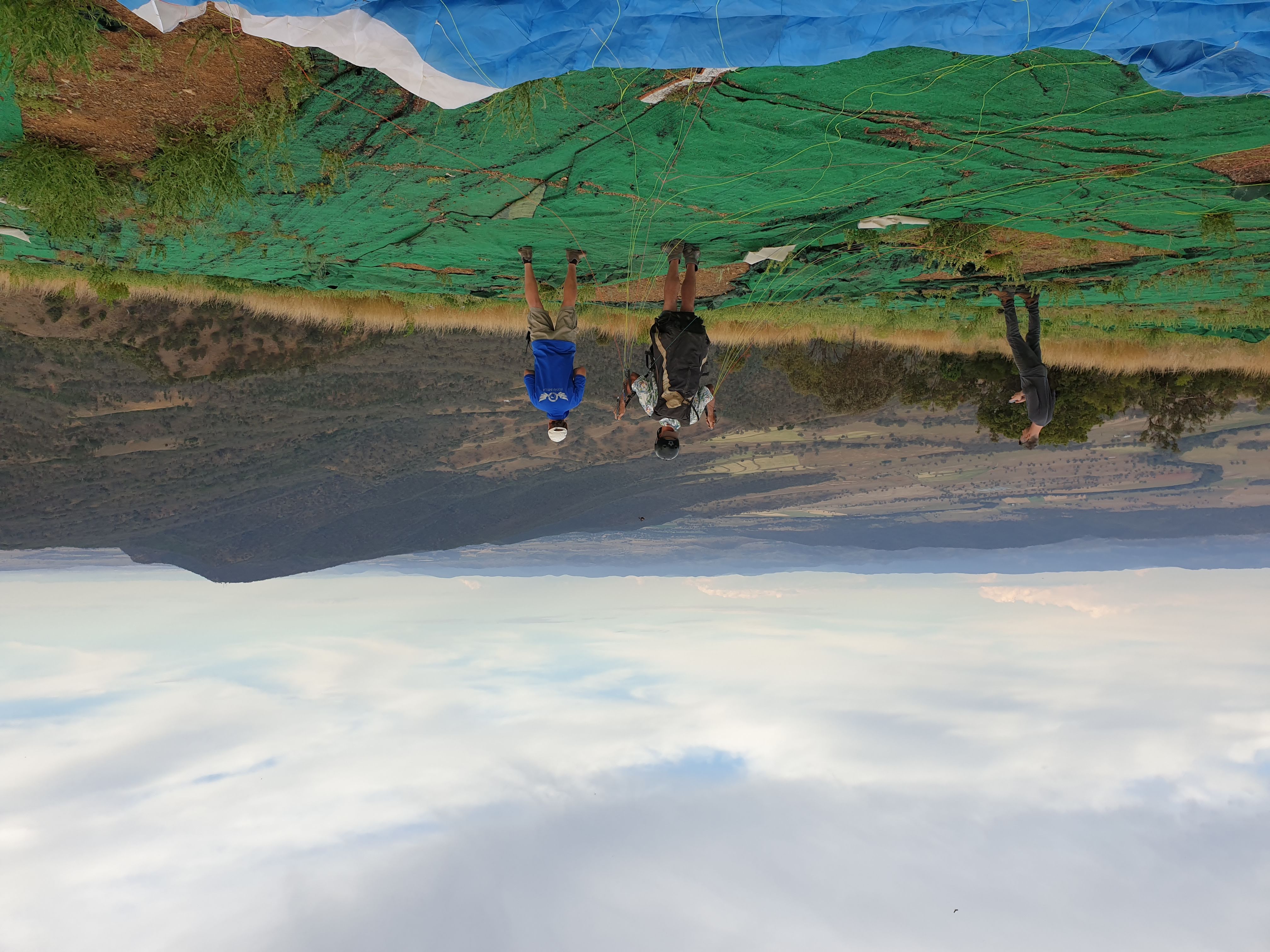 We managed to get in two flights from the south launch, the second of which was into the sunset which was pretty amazing. We didn’t get to drink in the experience though as we were trying out big-ears as well as rear-riser steering for the first time. Big ears is just pulling a specific line on both left and right risers (the outside A riser which is separated and coloured on the Alpha 6) which safely collapses part of the wing from the tips, allowing you to descend faster safely when required, though you need to steer with weight-shift only. Steering with the rear risers is so that you’re comfortable doing so in an emergency if your brake line had broken, for example.

I botched one of my launches as a gust move the wing to one side when it came up and I flailed my arms in response causing it to tip the other way, but the re-launch was pretty straight forward. The most spectacular part of the last flight was the sunset: 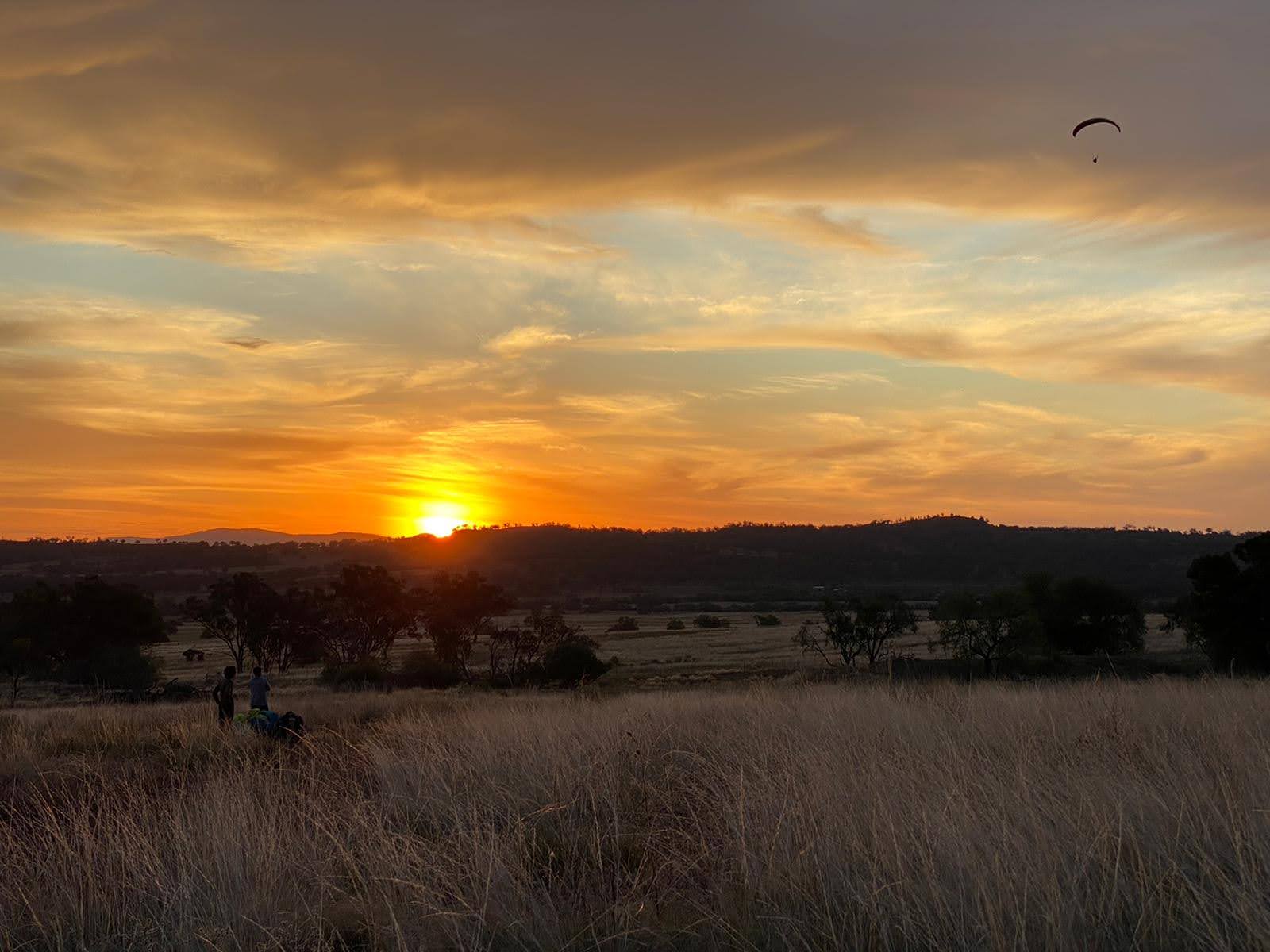