As planned we headed out to the training slope first thing this morning at 8am as the wind was calm but would be getting stronger later on. A thunderstorm after lunch saw us heading to head-quarters to start the course theory, beginning with wing shapes, glide angles and stalls.

Disclaimer: This is part 3 of an 8 part series detailing what I learned and experienced recently while undertaking the fantastic paragliding course with the team at FlyManilla. You can find links to the rest of the details for each day from my overall course summary. I’m taking notes for my own personal reference and learning while it’s fresh, but it’s totally possible I’ve remembered incorrectly and have made mistakes. These are not notes for others to learn from but may give an interested passer-by who is considering a course a good idea about how valuable the course at Manilla is. If you’re interested in learning to paraglide, I’d totally recommend this live-in 9-day course at FlyManilla. 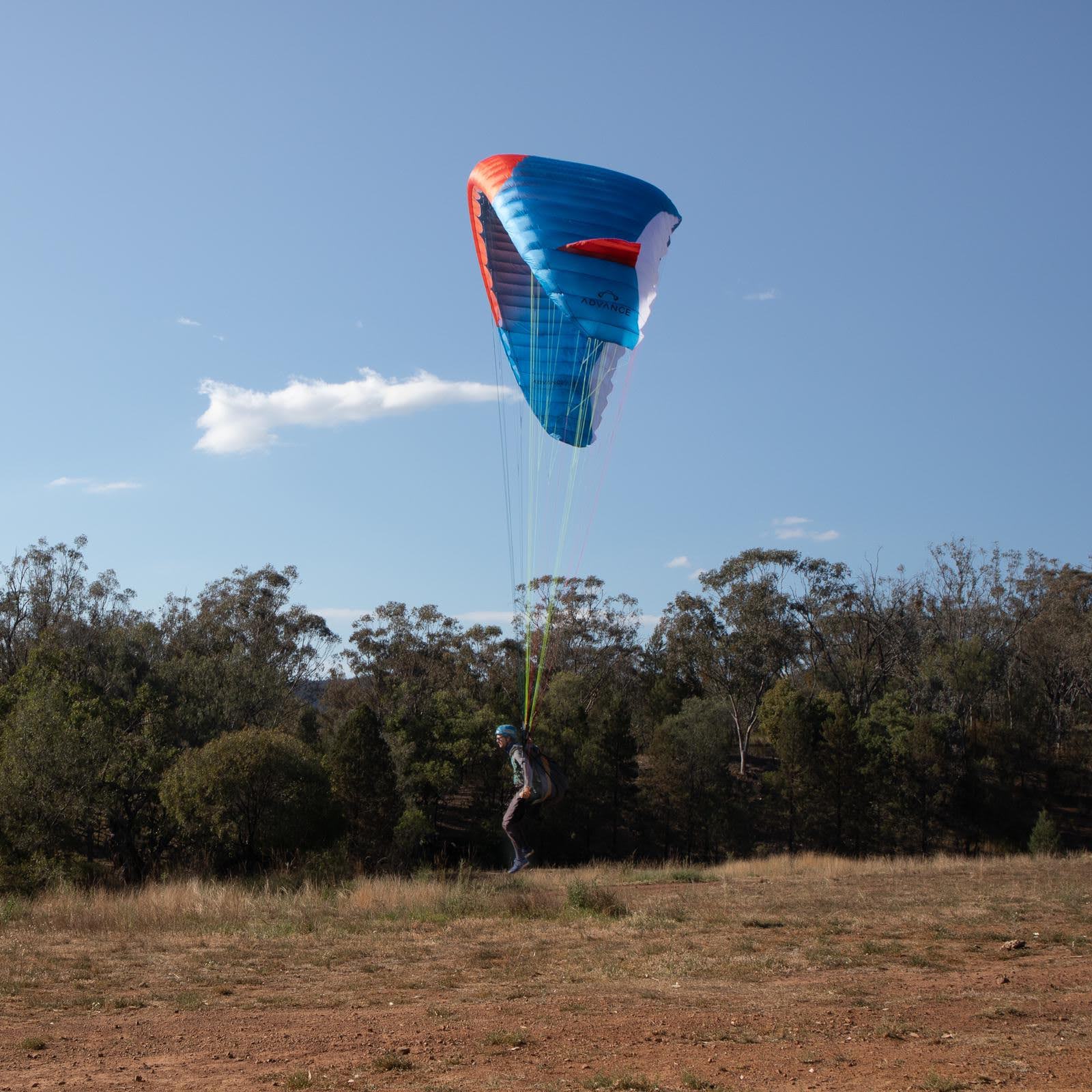 I was on a slightly bigger glider today (I’m at the top of the full weight range for the 26m2 Alpha 6 which I was on yesterday, and in the middle of the range for the 28m2 Alpha 6). The difference was quite noticeable - I didn’t need to run as fast to get off the ground, which also made it easier to avoid accelerating in front of the wing. Out of the 7 flights that I did on the training slope this morning (and one false start), these are the four things that stand out for me to learn:

1. NEVER ever unbuckle without taking the harness off completely

I’m so glad to have this experience at the training slope under proper supervision. Many of us are currently suffering from bruising on the upper thighs where the leg straps tend to dig and rub when running with the wing loaded. I thought I’d work to fix that today by wearing tracksuit pants, bunched up around my thighs, under my hiking over-pants. This worked pretty well, but after a few flights they were no longer bunched up for comfort around my thighs. Even knowing how careful you have to be, I thought I’d undo my waist strap to remind me the harness was open, then proceeded to do each leg: undo the buckle, bunch up the tracksuit pants, do the buckle up again. While I was doing the second leg, the basher - the old truck that takes us back up the hill - had stopped next to us. I was comfortable again, did up the waist strap and got in the truck with my glider. It was only a few minutes later when I was setup ready to fly that the instructor in charge helpfully asked, “so, what’s going on here?”, and I looked down knowing what I’d find - I’d not done up the second leg strap.

Never. Ever. Again. Nothing much would have happened in the training environment with only one leg strap done up - I would have unintentionally had weight on one side of the glider which would have turned slightly but I could have steered, but it was a reminder that I can never undo the harness without taking it off and going through my checks again.

I chatted with Karl, one of the instructors, about this later on while packing away the glider. Karl’s one of those people who is amazingly systematic and methodical about everything (it was Karl who demo’d packing the reserve chute on day 1). He emphatically recommends:

2. Always move forwards with the wing

I had one aborted launch on the training slope when I walked forwards to get the wing up with Bob controlling to keep it straight and it pulled backwards slightly with a small gust. Bob had said to let go of the A’s and start running but I’d paused slightly after being pulled back. When I did start running I could feel there wasn’t any pressure on my shoulders trying to hold me back and the intructors got me to stop and pull the wing down. What had happened was that the wing had been shooting up into position when I was pulled backwards, so when I paused, it continued past over my head to end up in front of me. I want to practise controlling this more in the ground handling field tomorrow.

Although I did have a couple of nice flights on the training slope, I still managed to reproduce more porpoising than I was happy with. This is a combination of accidentally braking while running as well as not building up speed at the same rate as the glider.

4. Stay under the wing

During one launch I was pulled sideways by a small cross-wind but was focussed on running forwards and didn’t crab sideways with the pull. I did get lifted off the ground but the pendulum of the paraglider (with me at the bottom) was slightly off which I tried to correct with brake (or just did my normal thing of unintentionally applying brake, not sure). Once in the air, whenever the glider rolls like this with a small cross-breeze, just let the pendulum effect happen (ie. gravity pulls me down centering the paraglider again) rather than trying to correct with brakes.

We ended up only getting 7 or 8 flight in before it became too thermic with bubbles of warmer air lifting us up higher than is helpful on the training field.

Karl is often around when I’m doing something, so it’s the perfect opportunity to have an expert watch and correct. I’d come back from the training slope with my glider just in a concertina in the back of Godfrey’s 4WD as we didn’t have a stuff-sack available for it there, but there was one back in the HQ building. Rather than just stuff it in the stuff sack, as the name implies, I saw Karl nearby so just took the opportunity to have him watch and point out things that I could learn:

Given that the weather was pretty thermic by mid-morning, rather than go out for ground handling in the paddock (which could be a bit dangerous for learners like us), we headed into the HQ building to work through some more theory. I won’t detail standard things like the angle of attack of a wing, the chord, camber, relative air flow etc., which are all in the standard texts such as The Art of Paragliding (and any site about aerodynamics) but there were some particularly interesting things to note.

We then went through the different types of drag and how they relate to paragliders:

Unfortunately not long after lunch we had a large thunder storm roll through meaning that those people who were planning a second tandem (to work on a few points) were unable to go and the paddocks were wet so we couldn’t take the old gliders out to learn reverse launch techniques. Instead, we headed back into the head-quarters and worked through more of the background theory for the certification exam (the Sports Aviation Federation of Australia also has a good study guide available).

Though pendular stability is your friend when up high, it can be your enemy near the ground.

The definition of a stall: when the wing reaches a critical angle of attack where the air changing direction is reduced to the point that the lift produced no longer counteracts the weight. The point at which your glider stalls can be affected by number of obvious and non-obvious factors, such as:

The angel of attack affects the lift, drag and airflow in different ways:

Drag is defined as the force resulting from the disruption of laminar air flow. Drag is the result of changes in airflow.

Tomorrow if the weather plays along we’ll be doing our first solo high flights!